The Cincinnati Bearcats (16-8, 9-3) went toe to toe with the Memphis tigers on Thursday night in a thrilling overtime game at 5/3rd Arena. The game marked the second OT game in a row for the Bearcats and the fifth for the season. Let’s look at some individual performances.

Jeremiah Davenport was electric. You might have forgotten he was somewhere down the bench sitting and watching… waiting. He was the energy off the bench the Bearcats had to have. He put up 8 points in 11 crucial minutes with the game on the line. I’d imagine we’ll see him on the court more often down the stretch.

Jaevin Cumberland threw in 10, hitting big threes when the team needed it the most.

Jarron Cumberland got off to a so start but finished with a nice line of 15, 5, and 9.

Tre Scott would not be denied going for 25 points and 19 rebounds. By the end of the game I was more mad that Tre didn’t get his 20th rebound than I was excited about the win over Memphis.

The Bearcats really had to have the game to stay alive for March. Joe Lunardi has the Bearcats as an 11 seed right now. 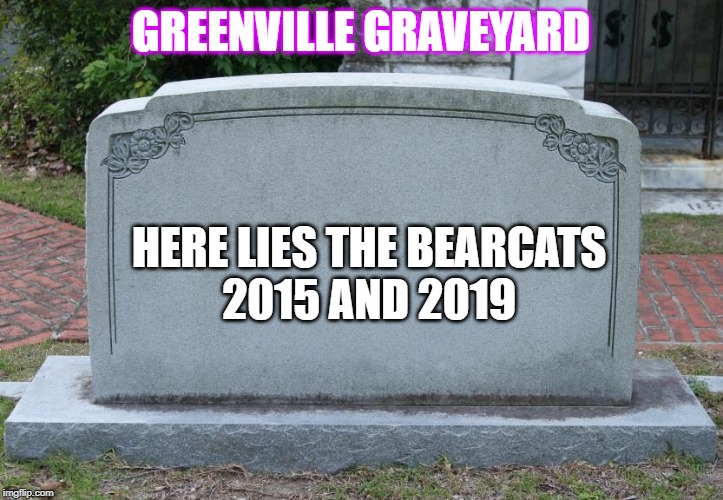 Needless to say this game wasn’t a gimme. The Bearcats had to actually show up to escape Greenville with a win.

Tre Scott picked up right were he left off against Memphis, starting off hot against the Pirates putting up 12 first half points and four rebounds, he finished with 14 and 12. He has to be the conference player of the week.

The other four starters were all in double figures led by Keith Williams game high 17 points.

The Bearcats again struggled from the line shooting 25% and they turned the ball over 22 times. That resulted in a third straight overtime for the Bearcats.

The Pirates kept it close and responded every time the Bearcats looked to take control. The Bearcats couldn’t pull away down the stretch and that gave the Pirates a light at the end of the tunnel.

The biggest problem? Jarron fouled out with 90 seconds left in regulation.

Free basketball will be the death of me.

Zach Harvey stepped up big with a huge three and Keith Williams did the rest, scoring 6 of his 17 in OT.

The Bearcats are in first place but have to do a better job playing above the competition. The Bearcats were 10 point favorites in the game but certainly didn’t play like it.

With the way things shook out this week UC is now in first place with only five games left in the regular season. If the next five are anything like the last three buckle up.

The Bearcats will enjoy a two game homestand first against UCF this coming Wednesday and again next sunday against Wichita State who is really desperate for a solid win. As of now they’re dancing, as an 11 seed but a slip up somewhere could change that really fast. The Bearcats will need at least 4 of the last 5 games and only if that one loss is at Houston and at this rate of games being extended it OT odds are you’ll need a beer.